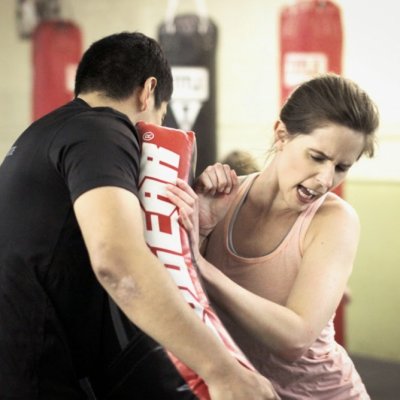 If you're not the strongest, hitting the temples (the sides of his forehead) are your best bet. It's the softest part of the head, which means you don't need to use too much force in order to cause damage. Using something as small as one knuckle could get the job done. Just don't do this unless you're in serious danger, because it could cause death.

If you can manage to get your hands around your attacker's neck, do so. This might be a bit difficult, because it requires a lot of effort. If you can't put his head in a chokehold, then you can karate chop the throat. The jaw is pretty sensitive as well, so if you can reach under it and press upward, make sure to do so.

If you've ever been hit in the ribs, you know how badly it hurts. Your ribs don't have all that much covering, which means that they're easy to injure. If your attacker's arms are extended, strike the ribs in order to break them. Of course, even if his arms are wrapped around you, it can't hurt to hit or kick his ribs in any way you can.

This is the obvious one. If a man grabs you, make sure to hit him where it hurts. Of course, even if a lady has a hold on you, you should kick her in the groin. Even though women have different parts down there, it still hurts to be kicked in that specific spot.

If you kick someone hard enough in the shin, they'll go down. That's why you should try to hurt that area of the leg. If you do, then it'll be harder for your attacker to keep his hold on you.

This is why you should always carry around some sort of pepper spray or perfume to spritz into your attacker's eyes. When he can't see, it'll be much easier for you to get away, because he'll have to rely on his other senses. Plus, have you ever gotten something like shampoo in your eye? The pain is pretty intense, so it'll distract him for a while.

It's no surprise that a blow to the head hurts, since it's where your brain is kept. What you might not have known is that smacking the flat of the forehead can cause some pretty bad damage. If you strike your attacker hard enough, it could even give him a concussion.

You never know when you'll be stuck in a dangerous situation with no one around to help you. That's why you need to figure out how to take care of yourself. Knowing how to fend off an attacker could save your life. What other self defense tips do you have that women everywhere should know?