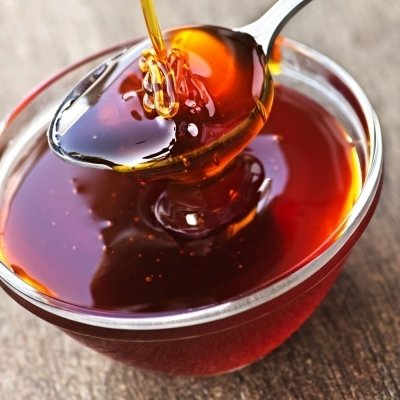 If you’ve heard about yacon, you might be curious to find out what the benefits of yacon syrup are and I’m here to tell you all about it. Yacon is a South American tuber which resembles a potato in appearance, but tastes like molasses or maple syrup. Yacon syrup can be used as a sweetener in a variety of foods and drinks, but the great part is, it won’t spike your blood sugar. But there are actually many more benefits of yacon syrup that you might not know about yet, so keep reading to find out more!

One of the most surprising benefits of yacon syrup, is that unlike refined sugar, yacon syrup doesn’t have a negative effect on gut flora. Instead, it has numerous digestive benefits such as having a high concentration of fructooligosaccharide (FOS) and inulin content. This means that yacon syrup has high fiber content, is high in prebiotics and they help feed beneficial bacteria in the gut.

Yacon syrup has also been touted as a weight loss aid. Dr. Oz even conducted an experiment with 40 women to see if yacon syrup really lived up to the hype. The group of women ate one teaspoon of yacon syrup before each meal for four week and was asked not to change their exercise or eating habits. The results of the study found that 73% of the women lost weight with 14 of the women losing over 5 pounds. To see the full results of the study, see: doctoroz.com

Another benefit of yacon syrup is that it can help with keeping bones healthy. Preliminary studies have found that yacon appears to increase the body’s ability to absorb minerals important for bone health, such as calcium. Better absorption of minerals that help the body maintain bone health will help us fight off osteoporosis and fractures.

A 2009 study by Susana Genta which used yacon in a group of overweight women found that LDL, the “bad” cholesterol levels decreased significantly. There are also several studies which showed the consumption of FOS can lower lipid levels in the blood. Also, yacon is high in good bacteria which is essential for gut health and the bacteria coverts FOS to short-chain fatty acids which can help prevent cholesterol synthesis in the liver.

Consuming yacon syrup can also help keep things moving along. This is especially important for those who experience constipation, irregularity or painful bowel movements. Those who have frequent diarrhea are advised against consuming yacon as it can exacerbate symptoms. Also, the fact that yacon is high in soluble fiber means that it can help you feel full longer.

Yacon syrup is also thought to help improve immune function by protecting the body’s defense system due to its high antioxidant content and its ability to help the body better absorb vital minerals and assist with vitamin B synthesis. Two studies done by Buddington et al. (2001) and Baynes & Varley (2001) found that fructanes in yacon have an indirect stimulating effect on the immune system.

While the fact that yacon syrup is a diabetes friendly food isn’t necessarily a health benefit, it’s good news for those looking for a low glycemic sweetener that has minimal impact on blood sugar levels. A Japanese study from 1984 found an improvement in glycemic index in those with Type 2 diabetes who added FOS in their diets for a few weeks. You can use as a sugar substitute for coffee, tea or desserts.

Despite being a sweetener, yacon syrup is low in calories. You know the FOS we’ve been talking about this whole time? Well, those guys are actually indigestible sugars so you get all the flavor without all of the calories. Dr. Oz explains it like this, “FOS resist breakdown by enzymes in the human digestive system and reach the colon without being digested.”

Before you run out and buy yourself a bottle, keep these things in mind. While the benefits of yacon syrup look promising, there are still medical experts who are skeptical as there aren’t many studies done on it. Yacon syrup is also not recommended for those who are allergic to sunflower seeds because yacon is a relative of the plant and as previously mentioned, anyone who frequently experiences loose stools are advised to avoid it. If you decide to give yacon a try, make sure you start slow to avoid any potential side effects from the high FOS content which include bloating, abdominal discomfort and nausea.

So, what do you think of yacon syrup? Do you think it’s just another fad that’ll go away with time? I really like that yacon has prebiotics in it and that it’s a sweetener that can assist in gut health. Have you tried yacon syrup before?