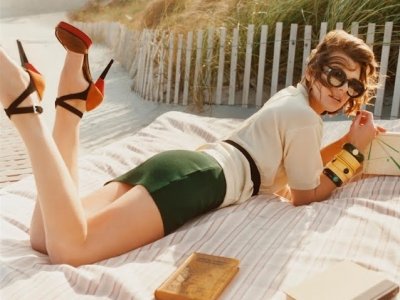 Telling us we're lucky to have such a slim frame must be one of the most common comments all skinny girls have heard. I don't understand what luck has to do with it. It's how we are, that's all. Besides, I don't feel very lucky when I get annoying comments such as the ones below …

2 Why Are You Complaining?

Yes, apparently we have no right to complain about anything connected with our size. I'm basically happy with my body - after all, it's the only one I have, and there's nothing wrong with being skinny. However, it is a problem when you get sick and lose weight that you can't afford to lose. And then there are the comments that we skinny girls have to put up with …

I actually heard this comment at my wedding. A guest saw my full plate and commented "Oh, I thought you never ate." Yet nobody would dream of saying to someone "I thought you eat too much." Some of us genuinely are built very slim; it has nothing to do with food intake. I'm not saying that it is more desirable than another body shape; I am saying that it can be natural.

4 At Least You're Not Fat

Well! That's me told. Apparently I'm better off than someone who is overweight, and should count my blessings. This type of comment manages to be distasteful to both slim and heavier women. It's saying that women with some extra pounds are somehow offensive, while also telling slimmer women to stop complaining. Way to go.

Skinny women have all been called names at some point. People tell us we're like a walking skeleton or call us names like chicken legs. If you think this is acceptable, try reversing the situation. Would you tell someone they've got legs like a tree trunk? Most likely (and quite rightly), you would see that as incredibly rude. Understand this: so is calling skinny women names.

This type of comment is often used on Internet comments about very slim celebrities. Some of them do appear to go on unnecessary diets, but how silly it is to imply that one or two high-calorie meals will sort them out. Female celebs should not be put under pressure to lose weight. And for those of us who are genuinely skinny, I have news for you - we could eat burgers every day and still not gain weight.

I've heard this comment many times over a few decades, and it's still infuriating. No, I'm not anorexic, I like my food, and I'm not bulimic either. I have no problem with food at all. It does not automatically follow that someone who is thin must have an eating disorder.

I really do feel as though skinny women are the last group it's okay to offend. Skinny guys are the target of nasty comments as well. Even if you think you are being kind, please think twice about making comments to a skinny girl. It's irritating, and can be very upsetting. What do you think?