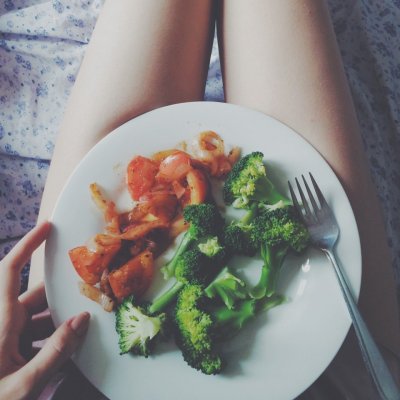 If you don’t avoid eating, you don’t purge and you don’t binge, you probably assume you don’t have an eating disorder, right? The world of eating disorders is always changing. I know this because I studied them in grad school and in the 10 years since, loads of things have changed. I try to keep up with the latest, which is how I stumbled across a brand new eating disorder that experts are increasingly being on the lookout for. It’s called orthorexia nervosa and is a sneaky disorder that you might not even know you have. Here’s everything you need to know.

1. What is Orthorexia Nervosa?

The Mayo Clinic defines this eating disorder as an obsession with a “perfect diet.” Sure, paying attention to what you eat is important, but when it takes over your life, it could become an issue. Just like anorexics have an unhealthy preoccupation with counting calories and restricting food, orthorexics are the same way about consuming only healthy foods.

Eating clean means foods free of dyes, preservatives and artificial flavors. That’s a very virtuous idea, but taking it to the extreme can be bad for you. It might mean avoiding foods that have nutritional benefits. Plus, you never get any joy out of having a meal if you’re super strict about what goes into your mouth or you spend all your time worrying about it.

In addition to being super restrictive about what you’re eating, you might also find that your definition of healthy eating interfering with your daily life. That might mean skipping happy hour with your friends because there isn’t anything for you to eat. Or avoiding your best friend’s baby shower because the snacks are all fried or fatty. As a result you’ll isolate yourself from life and suffer because of it.

4. Is It a True Eating Disorder?

Experts are divided on whether orthorexia is a true eating disorder or not. Some medical professionals are pushing for it to have it added to the official books that outline mental health disorders. Others say that orthorexia is just a version of obsessive compulsive disorder based on its control of what you eat and don’t eat. Either way, it’s definitely a problem that needs to be addressed.

Much like anorexia and bulimia affect a certain set of individuals, so too does orthorexia. According to experts, it generally afflicts groups of people that are super knowledgeable or engaged in health fields. This might be physical therapists, nutritionists, sports trainers and even dieticians. When eating healthy is your entire life, it can take over and turn into an issue. That doesn’t mean the average person won’t suffer from orthorexia though so be on the lookout for symptoms in yourself and your friends.

The main issue surrounding orthorexia is that most people who suffer from it don’t think they even have a problem. After all, who would think there was anything wrong with eating super healthy and paying close attention to their health? A healthy lifestyle is vital, but when it gets out of control, you could suffer the consequences. Other problems include skipping meals or spending more than you can afford on foods that fit your rigorous standards.

According to experts, orthorexia is an issue all by itself, but some mental health experts caution that it can transform itself into anorexia. Anorexia is characterized by a severe calorie restriction and a refusal to eat. It can cause death in its most severe stages so it’s very important to seek treatment for any eating disorder.

Do you have orthorexia? Never, ever stop eating healthy for fear that you’ll develop it, but make sure you have a good balance. What tips do you have for doing it right?