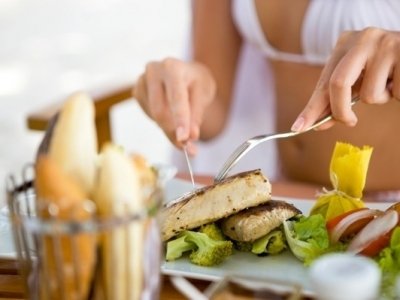 I’m sure you’ve all heard and read that you should eat more fish but do you know the benefits of eating fish regularly? You want to know more than “it’s good for you” don’t you? Researchers have already proved that eating fish once a week will offer a number of impressive health benefits – it contains omega-3 fatty acids that play a part in keeping so many diseases at bay. In fact, international health studies prove that the benefits of eating fish regularly include reducing the risk of several diseases and disorders. It is also healthier and generally, lower in calories than meat.

You might have heard the saying that fish is “brain food”. This is true and most of the benefits of eating fish stem from high levels of omega-3 fatty acids in fish. Depression is linked to a shortage of fatty acids in the brain. Omega 3 fatty acids affect the brain's cell membranes, making them more fluid and permeable. This in turn makes it easier for your brain cells to accept serotonin, a neurotransmitter that helps combat depression. Put simply, omega-3 fatty acids improve serotonin levels in your brain, which helps relieve depression and related symptoms. (Source dailymail.co.uk)

By eating fish as one of your regular sources of protein, you will increase your levels of "good" HDL cholesterol, which will have a positive impact on your cardiovascular health, lowering the risk of developing a serious heart disease. This will also play a big role in preventing diseases like blood clots, stroke, and inflammation of the tissues. (Source mayoclinic.org)

Medical researchers have discovered that children who eat fish are less likely to develop asthma in the later stages of their lives. (Source dailymail.co.uk)

People who suffer from rheumatoid arthritis should consider eating fish at least once a week, as it helps reduce inflammation in the joints. Medical researchers believe that eating fish will also help relieve painful symptoms associated with other autoimmune diseases.
(source nhs.uk)

This is another example of why fish is called brain food. Omega-3 fatty acids promote the health of brain tissues and slow down brain cell loss, and that's exactly the reason why researchers believe that the benefits of eating fish include the prevention/and risk of certain brain disorders, such as epilepsy, concussions, Alzheimer's, autism, and more. (source webmd.com)

Pregnant women should definitely eat fish. Those who eat fish in pregnancy are less likely to face issues related to premature deliveries. Fish and seafood in general is a great source of iron, protein, zinc, and of course, omega-3 fatty acids that play a big role in baby's growth and brain development. The only consideration is that pregnant women should go for seafood that's low in mercury, like trout, salmon, herring, and canned light tuna. (Source rcm.org.uk)

Eating fish regularly is a great way of maintaining a balance in blood sugar levels. It not only reduces the risk of developing diabetes, but it is also quite beneficial for diabetic sufferers, as it helps in preventing insulin spikes.(Source sciencedaily.com)

As fish is a rich source of omega-3 fatty acids, it works wonders in lowering the risk of certain types of cancers, such as breast, oral, colon, and prostate. Some researchers have found that eating fish can lower the risk of developing a cancer by 50% or more. Just make sure to go for oily fish, as it contains more healthy omega-3 fatty acids. Good choices include sardines, herring, lake trout, salmon, albacore tuna, and mackerel.
(source cancer.org)

I already mentioned about fish and premature births but generally, fish should be eaten throughout pregnancy and after. The transference of those marvelous little omega-3s is needed both during fetal development and post-natal. When a mother breastfeeds and she has a healthy diet including fish, she will be transferring omega-3 fatty acids to the baby. (Source news.bbc.co.uk)

It seems the whole medical and scientific world is united in their views of the benefits of eating fish. If you aren’t eating it regularly – why not? And if not, don’t you think you should? You can always take a fish oil supplement!